Liberal former Vice Premier, described as a “dove”. Have any of his values been passed on to his son, Xi Jinping? 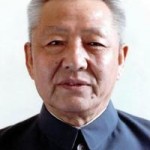 Pronunciation: Shee Jong-Shuhn soundbite
Born: Born 15 October 1913 to a land-owning family in Shaanxi
Education: Unknown.
Career: Despite being purged from Party several times, rose eventually to Vice Premier before being sidelined for expressing concerns over handling of Tiananmen protests in 1999. He is believed to have been a mentor to Hu Jintao and Wen Jiabao. He was close to Hu Yaobang.
Prospects: Died 24 May 2002.
Relevance to Tibet: Had a 40-year relationship with the 10th Panchen Lama. Is known to have carried a photo of the Dalai Lama and kept a watch the Dalai Lama gave him. Did he influence the views of his son, Xi Jinping, soon to be the most powerful leader in China?

Xi Zhongxun joined the Communist Youth League in May 1926 and the Communist Party of China in 1928. He was a guerilla leader in the 1930s and played an important role in the later stages of the Long March.

Xi senior later became Secretary General of the State Council and had overall responsibility for the 1954 visits to China of the Dalai Lama and Panchen Lama. Until 1962 he was responsible for the Party’s relationship with the Panchen Lama.

In 1959 Xi became the youngest Vice Premier, a position he held until he was purged in 1962.

Rehabilitated by Deng Xiaoping in 1978, Xi was Governor of Guangdong from 1979 to 1981, during which time he implemented the Shenzhen Economic Zone and was quoted as saying to Deng: “We need to reform China and implement this economic zone even if it means that we have to pave a bloody road ahead and I am to be responsible for it.” (Reportedly when trying to convince Deng of the necessity of market socialism in China.)

From 1981 onwards Xi appears to have been in charge of United Front work. During this period he was an interlocutor with exiled Tibetans, who have described how, in 1982, Xi was carrying a photo of the Dalai Lama. It was also revealed that the Dalai Lama had given Xi a watch in 1954, and that Xi had kept this watch safe throughout the Cultural Revolution.

According to China Vitae, Xi was Vice Chairman of the National People’s Congress from 1988 to 1993, but sidelined after the protests in Tiananmen Square in June 1989 (see below).

He is believed to have been a mentor to Hu Jintao and Wen Jiabao. He was close to Hu Yaobang. Wikipedia writes “He was remembered for his friendship to his colleagues, his tolerance to diverse cultures and religions, his idealism of an open market socialist country and his integrity in his beliefs. He was one of the few upper level leaders who voted during the 1980s for open reform and was persecuted afterwards for this bold move.”

Photos of Xi Zhongxun on a visit to the United States in 1980 can be viewed here.

Xi senior was first purged in 1962 and sent to work in a factory in Henan. Several explanations for this purging are available. In ‘The Private Life of Chairman Mao’, Dr Li Zhisui says Xi was too close to Peng Dehuai (a military colleague) who had criticized Mao’s Great Leap Forward in 1959. He was also accused of being “anti-party” and a supporter of purged leader Gao Gang. According to The Diplomatic Courier, Xi spoke out in favour of a popular novel that was regarded as a thinly-veiled criticism of the “Great Helmsman.” Claude Arpi suggests his closeness to the Panchen Lama was also a possible cause of the purge. This is borne out by references in Xi’s obituary of the Panchen Lama of the Rinpoche’s 70,000 character petition having brought Xi trouble in 1962 (see below).

During the Cultural Revolution (1966 – 1976) Xi was imprisoned and tortured and his children persecuted. A 1992 Washington Post article says, “One daughter died. The younger Xi recalled being locked up ‘three or four times’ when he was 15 because if his father’s crimes. Banished to Ya’nan, the revolutionary base of the party, he had to attend daily ‘struggle’ sessions, where he was often forced to read out denunciations of his father. ‘Even if you don’t understand, you are forced to understand,’ he said with a trace of bitterness. ‘It makes you mature earlier.'” (It should be noted that Xi Jinping joined the CCP in 1974 when his father was still in prison, and – according to a family friend – chose to survive by becoming “redder than red”.)

Xi Zhongxun was rehabilitated by Deng Xiaoping in 1978. Hu Yaobang, as head of the Organisation Department, oversaw the rehabilitation drive. Xi protested when Hu Yaobang was forced out in 1987 and later publicly opposed the military crackdown in Tiananmen Square in 1989, after which he was pushed into semi-retirement and rarely seen in public. The Washington Post article in 1992 described Xi Zhongxun, aged 79, as Vice Chairman of the NPC; “He is reported to be in poor health but still influential.”

Link to Tibet and other relevant anecdotes:

One Response to Xi Zhongxun