Xi Jinping succeeded Hu Jintao as Party Secretary-General and Chair of the Central Military Commission in November 2012. He was confirmed as China’s State President on 14 March 2013 and “re-elected” for a second term in March 2018. China’s leaders have, since Deng Xiaoping, been limited to serving two terms in office, but at the National People’s Congress in March 2018 the limit for Presidents and Vice Presidents was scrapped, meaning Xi (and his current deputy, Wang Qishan) could both serve beyond 2023.

With a career that spans Hebei, Fujian, Zhejiang and Shanghai (where he was drafted in after a pension fund scandal) Xi is known as a liberal who is tough on crime. In the face of public protests (some with as many as 50,000 participants), in Provinces where he served before moving to Beijing, he sent in troops and police to restore order. He is known to get “difficult” assignments — Corruption, the Olympics, Hong Kong, 60th anniversary of Tibet’s “liberation” etc. Xi visited Xinjiang in June 2009 where John Gittings (UK journalist) reported “He insisted that the local party should appoint officials who could do a better job of handling ethnic relations. He warned that they should solve the “real difficulties” that Uighurs suffer in housing, food, health, education and employment.”

Xi visited the Tibet Autonomous Region in 1998 when Deputy Party Secretary of Fujian Province as part of a “pairing up” support system and attended the 5th work forum on Tibet in April 2010. Between 17 and 22 July 2011 Xi headed a large Central government delegation to the Tibet Autonomous Region for events to mark the 60th Anniversary of what China calls the “peaceful liberation of Tibet.” In Lhasa on 19 July Xi presided over a major ceremony in the square below the Potala Palace. His message adhered to the Party line; “[We] should thoroughly fight against separatist activities by the Dalai clique by firmly relying on all ethnic groups… and completely smash any plot to destroy stability in Tibet and jeopardise national unity.” [Full text of speech Xinhua, 19 July 2011.] He also visited the Jokhang Temple where he urged monks to stay clear of “separatist forces.”

His 2011 visit took him to Tashilhunpo Monastery in Shigatse, where according to State media he “called on the religious circle in Tibet to continue their efforts to promote patriotism and maintain ethnic and national unity” and the town of Bayi in Kongpo where he congratulated People’s Liberation Army soldiers in the area for their contributions to “ethnic unity.” [State Media reports and images.] However, according to a Reuters report (in August 2012), when protests engulfed Tibet in 2008, Xi commented: “We should have normal hearts” – a remark that sharply contrasted with the abusive language used by then-TAR Party boss Zhang Qingli.

One or two commentators have reported on a visit to Dharamsala in August 2012 by Xiao Wunan, a Chinese official affiliated with the United Front Work Department and reportedly with connections to Xi Jinping. Indian analyst Jayadeva Ranade, writing for DNA India, said Xiao met the Dalai Lama, the Karmapa and Sikyong Lobsang Sangay. A Taiwanese source, Lin Chong-pin, the former deputy chairman of Taiwan’s Mainland Affairs Council, went further, saying he believed “Xiao was delivering messages from Xi Jinping, since Xiao’s father and Xi’s father were lifelong friends.”

Since Xi took office there has been an increased crackdown in Tibet (see www.xifailstibet.org), Xinjiang, on Chinese lawyers and other dissidents and controls on foreign NGOs, with the rare positive development being the move to abolish of Re-education Through Labour camps, probably directly linked to Xi’s own personal experience (see below). November 2013 saw the creation of two major new leading groups led by Xi Jinping – the first on “Overall Reform”, in which Xi is joined by Li Keqiang, Liu Yunshan and Zhang Gaoli. The South China Morning Post reported that Xi had named subgroups to focus on six reform categories: economics and ecology; culture; democracy and law; social systems; party building; and party discipline. The second leading group is a National Security Committee which will oversee, coordinate and monitor the country’s foreign policy as well as the domestic and defence issues related to security.

Xi Jinping and China’s leadership placed significant emphasis on United Front work and Tibet in 2015. Xi presided over a United Front Conference in May, shortly before meeting Gyaltsen Norbu, the Chinese-selected Panchen Lama and urging him to be a good patriot. At the end of July 2015 the Politburo announced the decision to create a Leading Group on United Front Work. There is no information available concerning who its members are, or how it relates to Leading Groups on Tibet and Xinjiang, led by Yu Zhengsheng.

The Sixth Work Forum on Tibet, attended by the entire Politburo, was held from 24 – 25 August 2015, prioritising stability and the “struggle against separatism” above economic development. The forum concluded a few days in advance of the 50th anniversary of the founding of the ‘Tibet Autonomous Region’. Read ICT’s report, Major Policy Meeting on Tibet in Build Up to Sensitive Anniversary, 28 August 2015.

In October 2016, the 6th Plenum pronounced that Party members should unite around the Central Committee “with Comrade Xi Jinping as the core”. Exiled former Party official Gao Wenqian, writing for Human Rights in China, said it wasn’t an exaggeration to call this a “coup”. The title of “Core Leader” brings no special powers but consolidated Xi’s position as the most powerful Chinese leader since Deng Xiaoping. Read Chris Buckley in the New York Times “Xi Jinping Is China’s ‘Core’ Leader: Here’s What It Means”

Despite Xi Jinping’s increasing grip on power, his reaction to personal criticism suggests underlying insecurities. The extreme measures enacted to identify and detain anyone connected to an anonymous letter that appeared briefly online in March 2016, calling on Xi to resign, attracted more attention than the letter itself. (See New York Times) Chinese websites were ordered to purge all reports that carry any connection between the Panama Papers and China’s leadership. Relatives of Xi Jinping, Zhang Gaoli and Liu Yunshan were named in the leaked documents.

Xi Jinping’s father was Xi Zhongxun, former Vice Premier and mastermind of the Shenzhen economic zone. Xi Zhongxun was close to the 10th Panchen Lama (who died in 1989) and a Wikileaks cable quotes a dissident writer as saying “the Dalai Lama still had great affection” for Xi senior. Xi Zhongxun was an interlocutor for exiled Tibetan envoys in the 1980s, and he was known to carry a photo of His Holiness. Xi senior was purged 3 times by Mao, supported Hu Yaobang’s progressive ideas including political reform, and publicly denounced the use of military force in Tiananmen Square, after which he disappeared from public. He died in 2002. (Note: the Financial Times reports that – like Hu Jintao and Wen Jiabao – Xi Jinping visits Hu Yaobang’s widow every Chinese New Year, and that the Xi family sent a wreath to the funeral of ousted leader Zhao Ziyang in 2005.)

There is no evidence from Xi Jinping’s policies on Tibet that he was influenced by his father, despite early speculation that this may be the case. For example, in September 2012, Reuters speculated whether Xi junior will have a soft spot for Tibet. The article quoted Bao Tong, formerly an aide to purged party chief Zhao Ziyang as saying, “To understand what kind of leader Xi Jinping will be, one must study his father’s (policies),”….. “No (Chinese) Communist will betray his father.”

Xi and his siblings were persecuted for their father’s ‘crimes” during the Cultural Revolution; a 1992 article in the Washington Post said that one daughter died during this time. Xi junior was sent down to Shaanxi for seven years, where – he says – he leaned to serve the people. It is notable that he joined the Party in 1974 when his father was still in prison and – according to a childhood friend – “Xi chose to survive by becoming redder than red.”

Xi Jinping is married to famous folk singer, Peng Liyuan (see below). This is his 2nd marriage but there have been rumours of discord (his first marriage was to the daughter of a former Chinese Ambassador to the UK; the marriage broke up when she wanted to come and study in the UK, but he felt living in the West was impossible for a future Politburo Standing Committee Member). Peng Liyuan is a PLA Major General and in 2011 was appointed as a goodwill ambassador for the World Health Organisation. Reuters reported in August 2012 that Peng is a buddhist. Xi has family overseas – his daughter Xi Mingze was studying at Harvard under a pseudonym (though press reports in 2013 suggested, like that many offspring of the new generation of senior Chinese leaders, she had been called home); his older sister, Xi An’an, is thought to live in Canada and his younger brother, Xi Yuanping, spent time in Hong Kong while it was under British rule.

In December 2010 and January 2011, a flurry of profiles of Xi appeared in international media, using new information based on leaked US cables. The most interesting featured the opinions of an unnamed professor who was a childhood friend of Xi. The professor reportedly said Xi was drawn to Buddhism during his early career, and had a “seeming belief in supernatural forces”. The professor added that Xi was incorruptible by money, did not drink or take drugs and women felt he was “boring”. (Malcolm Moore, The Telegraph). The leaked cables also revealed that Xi is a fan of the films “Saving Private Ryan” and “The Departed”, saying that in US movies “good usually prevails”, whereas some Chinese film-makers neglected “values they should promote”. 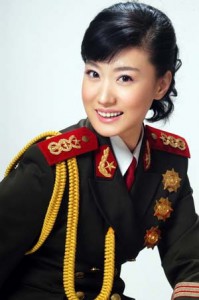 Peng Liyuan in her PLA Uniform.