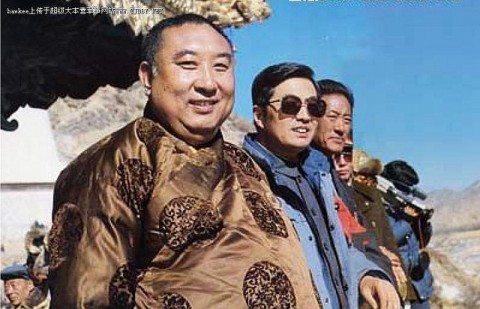 On 20 February 1989 a lengthy eulogy to the Panchen Lama was published in ‘The People’s Daily’, written by a senior Communist Party Leader named Xi Zhongxun. Xi Zhongxun, who himself passed away in 2002, is better known these days as the father of Xi Jinping, China’s current President. (See below with his family.)

This blog discusses Xi Zhongxun’s eulogy to the 10th Panchen Lama to see what clues it provides to Xi senior’s true attitudes to the Tibetan people. The original text can be found here, and the text with full translation here.

1989 was a tumultuous year in Tibetan history, just as it was in Chinese history. On 12 January China’s now former and recently indicted President, Hu Jintao, formally took up the post of Party Secretary of the Tibet Autonomous Region, having been transferred there in December 1988. The following month Hu was pictured with the 10th Panchen Lama at Tashilhunpo Monastery; five days later the Panchen Lama was dead at the age of 51. The cause was apparently heart failure, but many Tibetans then and now suspected foul play. Within a few weeks, popular protests against China’s occupation – which had been bubbling up since 1987 – broke out in Lhasa. The unrest rapidly escalated into a full-scale uprising and Hu Jintao imposed a state of martial law on 8 March 1989 which was to last until 1990

Xi made repeated mention of what he called the Panchen Lama’s “emotional” behaviour: “He was very enthusiastic, easily excited, and when he was working he could barely control his emotions.”…… “I often said to him: It’s correct to be outspoken. But you must not get upset. You can’t finish doing good things all at once. You mustn’t get irritated. He said to me: You are an old and good friend of mine. You understand me. I know you are saying this for my benefit. I’m happy about it.”

Xi Zhongxun’s eulogy also included plenty of on-message language about the task of the Communist Party in Tibet; hardly surprising, but demonstrating that Xi senior remained a nationalist at heart: “We must complete the Panchen Lama’s unfinished work of safeguarding the unity of the motherland and national unity and make new contributions to a united, prosperous and civilized socialist new Tibet, and to the common prosperity of all ethnic groups.”

Brevity seems not to be a quality much appreciated in China’s media but it is noteworthy that besides the lengthy descriptions of significant events, such as the 17 Point Agreement, the Tibetan Uprising of 1959 is dismissed in a couple of sentences, and the escape of the Dalai Lama to India is not mentioned at all. Interestingly Xi senior does not offer any criticism of the Dalai Lama, but he does refer to the Party’s mistakes in Tibet, and alludes to the Panchen Lama’s and his own periods of persecution and imprisonment.

Of particular interest is Xi Zhongxun’s account of events concerning the 24 year-old Panchen Lama’s famous “70,000 character petition” (described by Mao Zedong as “a poisoned arrow shot at the Party by reactionary feudal overlords”), a document “systematically critiquing and making recommendations about the work in Tibet and other Tibetan areas. The central leadership and State Council paid great attention to his work and felt that the majority of the Panchen Lama’s critiques and recommendations were good, but that some were too extreme. Entrusted by Premier Zhou Enlai, I went to see the Panchen Lama several times to talk with him. He was very angry and spoke some sharp words. I expressed my admiration for his willingness to speak frankly to the Communist Party leadership, but I urged him to not get upset or speak angry words. After a little while, he calmed down and said: ‘I accept what you say. You have seen me grow up from childhood, and have helped me from the beginning. You represent the Communist Party, and are also my friend. You want what’s best for me, I am grateful for that, but I’ve said some angry words. I will be more careful from now on. But I want to state clearly that I honestly support the Communist Party.’ Such was the Panchen Lama, an open-hearted great master.”

Xi Zhongxun went on: “After this I, Li Weihan, and Vice Chairman of the Standing Committee of the National People’s Congress Ngabo Ngawang Jigme, all exchanged frank views with the Panchen Lama, and after mutual consultation four good documents on combating leftist deviation and preventing extremism in work in Tibet were produced and submitted to the State Council for approval. Regrettably, in 1962, after the Tenth Plenary Session of the Eighth Communist Party Congress, due to the increased influence of leftist deviation, these four documents weren’t fully implemented. The Panchen Lama, Li Weihan and I were criticized for this. ”

Xi Zhongxun then wrote “After this event, my interaction with the Panchen Lama was interrupted for more than ten years. During the “Cultural Revolution” the Panchen Lama, along with many Communist Party and government officials, were severely persecuted.”

There is no direct mention of the Panchen Lama’s imprisonment in 1964, or of Xi Zhongxun’s own purging and imprisonment; the two were not reunited until 1978, after the 11th Communist Party Congress….” When old friends meet, all kinds of feelings well up. When the Panchen Lama saw me, he said uneasily: Because of my “70,000-Character Petition” I got you in trouble, I’m very sorry for that. I answered: No one got anyone in trouble. We all got physically tempered, endured challenges and increased our experience. The Communist Party understands you.”

At the close, Xi Zhongxun described the Panchen Lama’s death as “an irrevocable loss” and writes: “I grieve the sudden death of the Panchen Lama, I hope that he is reincarnated.”

Naturally, this being one of Tibetan buddhism’s most senior leaders, the 10th Panchen Lama was indeed reincarnated, but that’s a whole other story….