A member of the Central Military Commission. 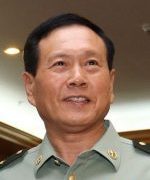 Pronunciation:
Born: 1954, Liaocheng, Shandong.
Education: Joined the PLA at the age of 16 and served in the Army Rocket Force (formerly called the Second Artillery Corps) – China’s nuclear arsenal.
Career: Long career in the Army Rocket Force, briefly interrupted by serving as Deputy Chief of Staff on the PLA General Staff Department (2010-2012). Was the first Army Officer promoted to General by Xi Jinping; in 2012 General Wei became Commander of the Army Rocket Force.
Prospects: Member of the Central Military Commission since 2017. Named Minister of Defence and a State Councilor in 2018, suggesting a high level of confidence from Xi Jinping.
Relevance to Tibet: None directly.

The South China Morning Post reported in February 2018 that Wei was a “reticent” leader who handed Xi Jinping the plan to break apart his own strategic missile force – even though it wasn’t in his interests. The paper writes: ‘Wei is known as a strategist whose political nous and philosophy of “doing more but saying less” has helped him to climb the career ladder faster than others, according to military insiders. “Wei was the first PLA department head to not only promise to support President Xi Jinping’s unprecedented military overhaul from the very beginning, but also to proactively meet Xi, who is also the CMC chairman,” a military insider who is close to Wei’s family said.’