A possible 6th generation leader of the PRC; one of Xi Jinping’s “New Zhijiang Army” 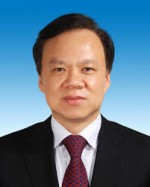 Pronunciation: Chen Min’are
Born: 1960, Zhuji City in Zhejiang Province
Education: Studied Chinese at Shaoxing Teacher’s College. Also holds a Masters degree in Law.
Career: Mostly in Zhejiang Province where he worked alongside Xi Jinping for over 4 years. Promoted to Party Secretary of Chongqing in July 2017.
Prospects: Eligible to join the Politburo in 2 years. Described as a confidant of Xi Jinping.
Relevance to Tibet: None directly, but considered a possible 6th generation leader.

A full member of the 18th Central Committee of the Communist Party of China, promoted to Party Secretary of Guizhou Province (from Governor) in 2015, and in July 2017 to Party Secretary of Chongqing – a role, according to the Financial Times, as a near guarantee for Politburo membership – displacing fellow 6th generation front-runner Sun Zhengcai.

The majority of Chen’s career, since he joined the CPC in 1982, was in Zhejiang Province, making him a member of the “Zhejiang clique” or “New Zhejiang Army” and, according to The Diplomat “Is this Man China’s Next Leader?”, is the first of that clique to emerge as a 6th generation leader.

Chen served as Vice Governor of Zhejiang Province between May 2007 and January 2012, working under then-Party Secretary, Xi Jinping. The Diplomat reported that “under [Chen’s] charge, Zhejiang Daily, the newspaper of the Zhejiang Provincial Party Committee, carried a series of articles from February 25, 2003 to March 25, 2007 by an author named ‘Zhexin’, the pen name of Xi Jinping.”

Chen was transferred to Guizhou in January 2012. He served as Governor of Guizhou from January 2013 – July 2015, at which time he was promoted to Party Secretary, becoming only the third provincial party-level chief born after the year 1960 (the other two, promoted previously, being Hu Chunhua and Sun Zhengcai). Chen seems very likely to join the Politburo in 2017.

“Sixth generation” leaders were, in theory, due to reach the top in 2022, when the leaders who took office in 2012 have served two five-year terms. [Xi Jinping and Li Keqiang are fifth generation; Mao Zedong was first generation.] However, with Xi Jinping’s removal of the two-term limit, there is no telling when – or if – this generation will get its chance to lead.

Born in the 1960s, a number of sixth generation officials have been named by China commentators in recent years as having serious leadership prospects. They include: Hu Chunhua, Zhou Qiang, Nur Bekri, Lu Hao, Chen Min’er, Zhang Qingwei and Zhang Guoqing. Names that were previously on this list but have suffered political downfall are Sun Zhengcai and Su Shilin.

The tradition of former leaders selecting their successor’s successor – which applied to Deng Xiaoping (choosing Hu Jintao) and Jiang Zemin (choosing Xi himself) – would appear to be in serious doubt. Kerry Brown, writing in the Diplomat in December 2014 observed: “The idea of Xi Jinping’s predecessor Hu Jintao having much say in [the choice of next leader] seems to grow more remote with each passing day, as Xi appears more and more dominant. It goes against political, let alone psychological, logic to think that Xi might, for mere form’s sake, bow to Hu in his choice.”

A general summary of this age group by Melinda Liu, Newsweek, October, 2007:

Melinda Liu, writing in Newsweek in October, 2007, said: The ’60s Generation, as they’re also known, are seen as worldlier, more traveled and less doctrinaire than any previous Chinese generation….. the Gen-Sixers are less ideological and more market-savvy; their peers include private-sector millionaires and environmental activists. But they’re also apt to be nationalistic, even arrogant, some analysts say. “They lack the humility of [their elders],” says Cheng Li, a Sinologist at the Brookings Institution in Washington. “Some of them are quite spoiled, in my view.”