The China Magic at Work by Jonathan Mirsky 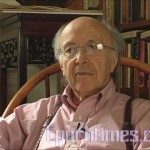 The China Magic at Work

By Jonathan Mirsky, a journalist specialising in Chinese affairs. He has visited Tibet six times since 1982.

In the last 12 months more than twenty Tibetans have set fire to themselves to protest Chinese rule. There have been only muted expressions of concern from Western leaders. It is therefore astounding that Washington and London openly denounced China and Russia after they alone vetoed the United Nation’s planned sanctions on Syria.  Secretary of State Clinton stated they had “neutered the UN” and Foreign Secretary Hague soon agreed. Naming China was especially noteworthy.

Normally, actions by the Chinese that would attract broad vilification if undertaken by any other country, are greeted with international silence. There is a belief, propagated from Beijing, and encouraged by foreign “China hands,” that Chinese dislike public contention – as if other countries don’t mind it – and prefer discussions on sensitive matters “behind the screen.”

This contention falls to the ground at the first hurdle. Chinese neighbourhoods vibrate with public disputes. In international affairs Beijing never shrinks from assailing other countries, usually with the words: “They have hurt the feelings of the Chinese people.” Children are taught about 19th century national humiliations like the Opium Wars and urged to be sure they do not recur.

Chinese students at elite Western universities insist that Western countries are always poised to insult China or interfere in its sovereignty. Party Chairman Hu Jintao recently warned that Chinese must  “forever ring the alarm bell” against “infiltration from the West”.

Indeed, the leaders of most countries shrink from even private criticism of China, especially in the field of human rights. In December 1989, six months after the Tiananmen killings, US National Security Advisor Brent Scowcroft, speaking in the presence of foreign reporters in Beijing, told Deng Xiaoping, who had ordered the crackdown in over 300 Chinese cities, “My president [George Bush, snr] wants me to tell you he is your friend, your friend forever.”

In 1991 I reported from Beijing on then-Prime Minister Major’s visit, the first by any Western leader since Tiananmen. He assured the reporters for the British press that when he met Premier Li Peng he would “bang the table” about human rights; he asked me for Amnesty International’s list of Chinese political prisoners.  After his meeting with Mr.Li, Mr. Major told us he had raised human rights with the Premier and handed him the list. A senior Hong Kong official who had been in the room, however, told me there had been no such discussion.

When Premier Wen Jiabao was in London last year for a meeting with Prime Minister Cameron, it was announced that human rights were on the agenda, but at the press conference afterwards, while questions on other topics were answered at length, Mr.Cameron declined to say what if anything had been discussed about human rights.

Last year when Liu Xiaobo, already in prison for his fourth term, was awarded the Nobel Peace Prize, Beijing warned foreign ambassadors in Oslo not to attend the ceremony. Sixteen complied.

As for the UN veto itself, Moscow’s interest is economic and military. It is a major supplier of weapons to the Syrian government; the tanks rolling through the streets of Hom are Russian-made.

It is wholly different for China.  Beijing wants no principle established whereby the UN could censure a country’s internal behaviour. Such a judgement would focus on how Beijing has mauled its population since the establishment of Communist rule in 1949. The history is bleak, from the slaughter of millions of landlords in the early Fifties, to the persecutions of the Anti-Rightist movement and the Great Leap in the late Fifties, the famine of 1959-1961 in which probably 40 million died owing to Mao’s delusions, and the Cultural Revolution of 1966-1976. Beginning almost at once under the new regime, Tibet and Xinjiang have endured decades of Chinese cultural outrages and killings.

Now that London and Washington have rebuked Beijing it is difficult to imagine what comes next. Prospective-President Xi Jinping, whose record as Party Secretary in Zhejiang province is a dark one, is today visiting Washington. I expected bland assurances from both sides that outstanding problems were discussed in a “cordial atmosphere.” But perhaps because of the Syria sanctions scandal, Obama, Clinton and Biden have spoken relatively bluntly to Xi, who has uttered the usual Chinese platitudes on human rights.