A Deputy Executive Director of the UFWD, and therefore a potential interlocutor for Tibetan Government in exile 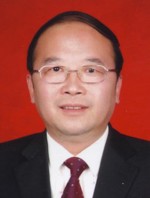 Pronunciation: Jahng Yee-jee-ong soundbite
Born: 1955, Shanghai
Education: Worked in a Qinghai factory in 1972. Graduate of the Central Party School.
Career: Spent most of his career in Qinghai and the Tibet Autonomous Region (TAR), which was likely regarded as useful training for the United Front Work Department. Member of 18th Central Committee.
Prospects: Prospects unclear. Unlikely to be a candidate for high office.
Relevance to Tibet: A former Deputy Party Secretary of the TAR. A potential interlocutor for the Tibetan Government in exile.

Most of Zhang Yijiong’s career was spent in Qinghai Province (Communist Youth League from 1985 – 1990, then successive positions from 1998 to 2006. From 2006 to 2010 he served as a Deputy Secretary of the Tibet Autonomous Region, serving briefly as Secretary of the TAR Politics and Law Committee before being moved to Jiangxi Province.

His appointment to the United Front Work Department was announced in June 2012 in China Daily.

This entry was posted in Profiles. Bookmark the permalink.
This site uses cookies: Find out more.