None directly but a close advisor (and rumoured childhood friend) to Xi Jinping on economic policy. 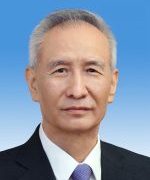 Pronunciation: Lee’oo Her
Born: 1952, Beijing.
Education: Renmin University of China, Seton Hall University and a Masters from Harvard University. Academic background and extensive publications on various aspects of economic theory.
Career: Worked for various state organs in Beijing, including the National Development and Reform Commission, State Information Centre, and Development Research Centre of the State Council. Rumoured to have been friends with Xi since teenage years, and thought to have been a close adviser and architect of China’s economic policy since 2013.
Prospects: Member of 19th Politburo, Head of Vice Premier as of March 2018
Relevance to Tibet: None directly

This is a “mini” profile.

Liu He rose to international prominence in January 2018 giving China’s keynote speech at the Davos Economic Forum; a trade mission to the US in February 2018 could have been overshadowed by the President Trump’s decision to impose import tariffs on steel and aluminium, but according to the BBC; “Mr Liu seems to have made an impression, with murmurings among US counterparts that he was not only an advocate for continuing economic reform – but someone they could work with.”