Posted on October 1, 2010 by Alison Reynolds 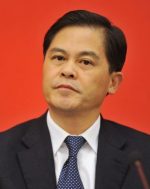 Pronunciation: Chen How
Born: 1954, Haimen, Jiangsu Province.
Education: Chinese literature at Jiang’an University, PostGraduate degree in Economics, MBA.
Career: Worked as a school teacher from 1973 – 1977, joined the Party in 1976. District positions were followed by a stint in Shanghai at the same time as Xi Jinping. In 2011 he became Vice-Chairman of the All-China Federation of Trade Unions. Governor of Yunnan since 2014.
Prospects: Thought to be an ally of Xi Jinping. Promoted to Party Secretary following the removal of Li Jiheng.
Relevance to Tibet: As Yunnan Province Party Secretary, responsible for large areas of Tibet.

This is a mini-profile. Chen Hao has worked in Yunnan as Vice-Governor, Acting Governor and then Governor since 2014, but his promotion is being linked to the time he worked alongside Xi Jinping in Shanghai.