On 31 August 2012 Reuters published a piece entitled “Does China’s next leader have a soft spot for Tibet?” This question has been occupying Tibet campaigners ever since Xi Jinping’s name started to circulate as the likely successor of Hu Jintao.

In February this year, on the eve of Xi’s visit to the United States, I shared some personal thoughts, reflecting what we could discern from the career and opinions of his father, Xi Zhongxun, a revolutionary hero who was close to the 10th Panchen Lama for 40 years, and is remembered fondly by the Dalai Lama. [Photo below right shows Xi Zhongxun talking with the Dalai Lama’s brother, Gyalo Thondup.] 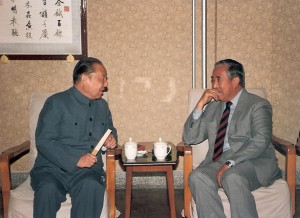 Reuters provides some new information that indicates promise; they report that Xi commented: “We should have normal hearts” in the aftermath of the 2008 protests in Tibet (in contrast to Zhang Qingli’s vitriolic description of the Dalai Lama as a “jackal in Buddhist monk’s robes” with “the face of a human and the heart of a beast”), and additionally reports that not only is Xi’s wife, Peng Liyuan a Buddhist, but that in 2006 Xi went ‘out of his way’ to host the first World Buddhist Forum in Zhejiang.

Reuters goes further, quoting Bao Tong, a former political prisoner and one-time senior aide to purged General Party Secretary Zhao Ziyang, as saying ‘ “To understand what kind of leader Xi Jinping will be, one must study his father’s (policies),”…. “No (Chinese) Communist will betray his father.”‘

Tibet campaigners are not traditionally optimistic about what Chinese leaders might do for Tibet; (10 years ago we said that Hu Jintao’s policies in Tibet showed he was no reformer, and how right – sadly – we were!) We are fascinated by the connection between Xi senior and Xi junior, but over-eulogising Xi Zhongxun is probably naive. Whilst he clearly had deep moral integrity, courageously defending Hu Yaobang and speaking out against the use of force in Tiananmen Square, he comes across as being at heart a Han chauvinist, committed to upholding China’s occupation of Tibet. In a lengthy obituary to the 10th Panchen Lama, published in 1989, Xi Zhongxun wrote “As an outstanding representative and leader of the Tibetan people and Tibetan Buddhism, the Great Master Panchen always linked the fate and future of Tibet to that of the Motherland and the Communist Party’s leadership. During various historical periods, from the eve of victory of the Chinese people’s war for liberation to the founding of New China, the Great Master Panchen wholeheartedly supported the correct decisions of the Chinese Communist Party.”

Xi junior continues to be circumspect on Tibet. He stuck faithfully to the script during his visit to Tibet in July 2011, vowing to “completely smash any plot to destroy stability in Tibet and jeopardize national unity”, but it was hardly to be expected that he would do otherwise on such a high-profile occasion. Reuters significantly quotes more than one anonymous Chinese official who recognize that the thinking on Tibet has to change, and assert that Tibet will be Xi’s challenge, just as Taiwan was Hu’s.