Jin Wei and Tibet – a CCP rethink, or a pragmatist going out on a limb?

Jin Wei and Tibet – a CCP rethink, or a pragmatist going out on a limb?

In early June, Professor Jin Wei, an expert in religious and ethnic affairs at the Central Party School, gave an interview to the Hong Kong magazine Asia Weekly about Beijing’s Tibet policy. We are indebted to the International Campaign for Tibet for translating her interview in full 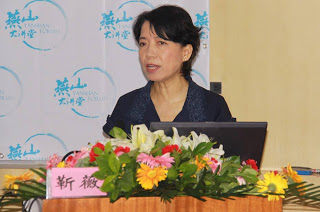 Although her comments are often prefaced by “my personal opinion is…” it seems likely, though not certain, that she received some kind of official sanction to make these remarks, which represent a rare critique of official policy, especially in regard to the Dalai Lama, whom she recognizes as having “retired from politics in 2011.”

Her comments are detailed and deserving of being read in full, but in a nutshell, she warns against politicizing religion, suggests restarting dialogue with the Dalai Lama’s representatives, “putting aside the ‘Middle Way’ and other political issues, [and] discuss allowing the Dalai Lama to visit to Hong Kong or Macau purely in his capacity as a religious leader”. She also poses the idea of the Dalai Lama residing in Hong Kong for a while and, if that “progresses smoothly”, an eventual visit to Tibet “may be considered.”

She concludes by saying “Tibet-related issues are crucial for contemporary China. If we can use creative ideas to break the impasse, not only would it promote social stability and prevent the creation of long-lasting nationality wounds, it would also have a positive effect on other minority nationalities in China. At the same time, it could be useful for reunification with Taiwan and improve China’s international image.”

Jin Wei’s interview was fairly widely reported by international media, with some speculating that this could herald a policy transformation in Beijing, with others interpreting it as recognition that the Party would have to make certain concessions in order to retain control of Tibet.

Tibetans and Tibet watchers were generally more cautious; for example Thubten Samphel in the Tibetan Political Review. Beijing-based Tibetan writer Tsering Woeser also focused on Jin Wei’s emphasis on securing control of the Dalai Lama’s reincarnation. In relation to this, and other reports that policy on display of pictures of the Dalai Lama might be relaxed, Nicholas Bequelin of Human Rights Watch told the South China Morning Post, “What matters to Beijing is how to cement its control” “If the religious policies don’t help Beijing’s objective to domesticate the region – avoiding popular protest and ethnic tensions – then the leadership will revise them. “This just reflects that the new leadership is more pragmatic about these issues, but the fundamental policy has not changed.”