Responsible for Central Government’s relations with the non-Han Chinese citizens of China. 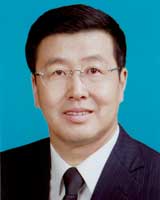 Pronunciation: Batte-er
Born: Of Mongol Nationality, born 1955 in Liaoning Province
Education: .
Career: After joining the Communist Party in 1981, was posted in Inner Mongolia where he spent his entire political career to date, ultimately becoming Governor of Inner Mongolia from 2009 – 2016 before taking up the role of Chair of State Ethnic Affairs Commission.
Prospects: State Ethnic Affairs Commission role is normally held by an official of “minority” ethnicity, but position-holders do not necessarily rise further.
Relevance to Tibet: Responsible for Central Government’s relations with the non-Han Chinese citizens of China.

This is a “mini” profile, see information above right.

Cheng Li, Brookings, 2008 wrote that Chinese leaders have “recognized the value of having ethnic minority cadres serve in the Party-state elite, both for propaganda purposes as well as to inspire minority peoples to view the system as containing opportunities for their own advancement and therefore work within the system rather than against it. Those ethnic minority elites who have been appointed by the CCP Organization Department have usually gone through a great deal of scrutiny to make sure that they are loyal to the Communist regime and will obediently carry out the orders of the Party’s national leadership.”