Has met the Dalai Lama. Thought to be an interlocutor with Tibetan Government in exile (official or unofficial)

Pronunciation: Shee-ow Woo-nan
Born: 1964 in Beijing.
Education: Information sketchy: holds a master’s and honorary doctorate degree.
Career: Xiao asked to be described as “a former high official” in the CPC when interviewed by the BBC. Possibly UFWD.
Prospects: Fingers in many pies.
Relevance to Tibet: Thought to have close links to the Chinese leadership and possibly an interlocutor with the Tibetan Government in Exile

Xiao Wunan is Executive Vice Chairman of the Asia Pacific Exchange and Cooperation Foundation or APECF, on whose website is a long list of Xaio’s other positions, including International Chairman, Religion and Cooperation Organization for the United Nations, a string of roles at a number of Universities around the world, and a former VP of the World Buddhist Peace Foundation.

In the article, Xiao asked to be described as a “former high official” (of the CPC). Sudworth reported that he was rumoured to have close links to the Chinese leadership and to have worked closely with the country’s security services. Xiao’s APECF biography includes the information that he received the “Outstanding Young Talent Award” from the Communist Youth League of China. Indian China expert Jayadeva Renade has asserted that Xiao is or was affiliated to the United Front Work Department. 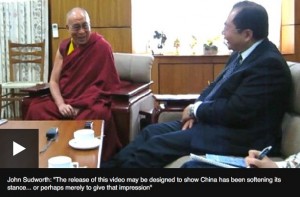 Xiao gave the BBC a video of a meeting between himself and the Dalai Lama, that had taken place in Dharamsala in August 2012 (click on the link above or the image right and scroll down to near the bottom of the BBC article to view the video); rare documentary evidence of face-to-face talks between the Dalai Lama himself and someone close to the Chinese government. The meeting had been reported elsewhere by commentators who speculated that Xiao may have carried a message for the Dalai Lama from Xi Jinping himself, but Xiao insisted to the BBC that he had not been acting as a Chinese government envoy. However, as John Sudworth speculated: “the important question is whether Xiao’s permission for the BBC to witness him worshipping at a Buddhist altar is meant to send a signal.” In 2013 Xiao told Reuters that “President Xi and his family have feelings for Buddhism”.

Xiao seems to have friends in high places; he has “played an essential role in strengthening diplomatic ties between China and Italy”, according to the APECF website, and in February 2013 he is pictured at a Buckingham Palace banquet, meeting Prince Charles and British Prime Minister David Cameron.

He is deeply involved in the Buddhist Lumbini development project in Nepal, comprising $3 billion of China’s money to develop the birthplace of the buddha, although Nepal media reported in December 2014 that the Social Welfare Council had started a process to blacklist APECF for its lack of transparency and accountability.

One Response to Xiao Wunan