Posted on October 1, 2017 by Alison Reynolds

Former Party Secretary of Gansu Province which encompasses a part of Tibet. 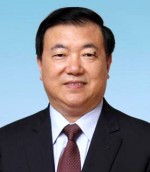 In April 2017 he was demoted to the position of vice chairman of the Education, Science, Culture and Public Health Committee of the 12th National People’s Congress. In July 2017 Xinhua reported that he is being investigated for “severe disciplinary violations”.