A Deputy Chair of the Tibet Work Leading Group. In charge of Security.

Minister of Public Security from 2007 – 2012 (in charge of China’s Police Forces; replaced by Guo Shengkun on 28 December 2012), Political Commissar of the Chinese People’s Armed Police. Was deputy to Zhou Yongkang on the Party’s Politics and Law Commission until 2012. The Financial Times reported in May 2012 that Zhou Yongkang’s support for Bo Xilai had led to Zhou’s public security responsibilities being passed to Meng, and that the role of “Security Tsar” would be dropped from the Politburo Standing Committee in the future.

18 years (until 1986) in various Party positions at Qianwei Farm, Shanghai. Was vice-mayor of Shanghai.

Relationship with Hu and Wen was unclear (the “Shanghai Gang” are strong opponents of the Hu-Wen philosophy). Boxun.com reported that Meng was criticized by Wen Jiabao for arresting several human rights activists just prior to the PRC’s 60th anniversary celebration.

In December 2011, Meng appeared on Chinese television visiting Kirti Monastery in Ngaba – a major centre of unrest and where numerous self-immolations had taken place. See http://news.cntv.cn/china/20111202/110460.shtml. 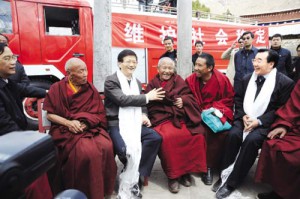 One Response to Meng Jianzhu