Posted on September 30, 2011 by Alison Reynolds 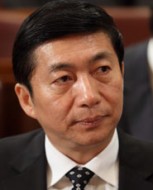 Pronunciation: Lwoh Hwigh-ning
Born: 1954 in Anhui but considered a native of Yiwu, Zhejiang Province.
Education: A “sent-down” youth, who was a steelworker in the 1970s before studying political economics at Anhui University, graduating in 1982. Took a doctorate in economics 2000-2003.
Career: Joined the CCP in 1982. Various roles in Anhui, including Propaganda Chief in 1999. Deputy Party Secretary of Qinghai from 2003 and Governor from 2010 – 2013.
Prospects: Long-term prospects unclear.
Relevance to Tibet: Party Secretary of Qinghai, which includes large areas of Tibet.

This is a “mini” profile which will be added to in the coming weeks. Member of 18th Central Committee. His promotion, according to Xinhua, was “based on an assessment of the overall position, the need of work and the actual situation of the province’s leadership buildup.”