A rising leader with considerable experience in Tibetan areas, including the TAR between 2003 and 2013 (last post was Deputy Party Secretary). 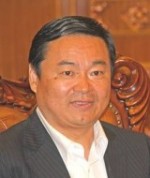 Pronunciation: How Peng
Born: 1960, Shaanxi Province
Education: A rusticated or “sent-down” youth who worked in Gansu Province in the 1970s. Graduated from Northwest Polytechnical University (Shaanxi Province) in 1982.
Career: Worked in Gansu Province 1999 – 2003, rising to Deputy Party Secretary of Lanzhou City, before being transferred to the Tibet Autonomous Region as a Vice Chair of the TAR government, and Deputy Party Secretary from 2006 to 2013. Acting Governor of Qinghai Province since March 2013.
Prospects: Hao Peng’s experience in Gansu and the TAR seems likely to stand him in good stead for future promotion.
Relevance to Tibet: Head of the government of Qinghai Province, which encompasses large areas of Tibet.

In 2010, Hao Peng gave a press conference to a select party of foreign journalists. Here are some extracts of what he is reported to have said: