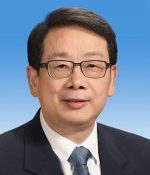 Pronunciation: Chen Hsee
Born: 1953, Fuzhou in Fujian Province.
Education: Most significantly Tsinghua University (Chemical Engineering) where he became friends with Xi Jinping. Later took a Masters at Tsinghua.
Career: A combined academic and party career that included two years as visiting scholar at Stanford University; Party Secretary of Tsinghau University in 2002 and Vice Minister for Education in 2008. A brief stint in Liaoning Province then PS of the China Association for Science and Technology. In 2013 was appointed Deputy Head of Organization Department and a member of the Central Leading Group for Inspection Work.
Prospects: Promoted to lead the Party’s Organization Department and President of the Central Party School (the latter usually filled by a Standing Committee member)
Relevance to Tibet: None directly. An ally of Xi Jinping; they shared a dormitory at Tsinghua in the 1970s.

“The national headquarters of the Central Organization Department occupy an unmarked building in Beijing, about a kilometre west of Tiananmen Square along the broad sweep of Chang’an Avenue. No sign hangs outside indicating the business of the building’s tenant. The department’s general switchboard number is unlisted. Calls from landlines in the building to mobile phones do not display an incoming number, as is customary for ordinary phones, just a string of zeros.”

(Richard McGregor, writing in ‘The Party’). So best to try…..