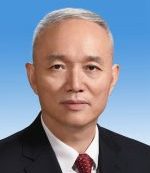 Pronunciation: Tsai Chee
Born: 1955, Youxi County, Fujian Province.
Education: A first degree in political economics from Fujian Normal University (1970s), and a Masters in Law (1990s).
Career: Various roles in Fujian and served for many years (1999-2014) in Zhejiang, both Provinces where Xi Jinping was Party Secretary. Was moved to Beijing in 2014, apparently to work at the National Security Commission, a body established and led by Xi Jinping. Acting Mayor of Beijing in 2016, and Party Secretary since May 2017.
Prospects: Promoted to the 19th Politburo. His rise since 2014 has been dramatic.
Relevance to Tibet: None directly but Cai Qi is close to Xi Jinping.

Cai Qi is rare among Chinese politicians in that he has been promoted to the Politburo without first serving on the Central Committee. His rise since 2014 has been stratospheric.

The Economist wrote of Cai Qi’s promotion to Beijing Party Secretary that he was an unusual choice, in part due to his previous (now ceased) activity on social media: “At that level of leadership, officials normally try their hardest to conform. Mr Cai, however, projects a more independent-minded persona. He refrains from dying his hair shoe-polish black ..[and].. he was an avid microblogger before joining the NSC. Some of the views Mr Cai used to share in his Zhejiang days on Tencent Weibo, a Twitter-like platform, lie far outside the cautious limits of party-speak. In 2011 he bemoaned the fact that Chinese censors block access to Facebook….That Mr Cai tweeted at all was unusual enough for a senior official. That he did so engagingly was truly exceptional. With millions of followers on Tencent Weibo, he became one of the country’s biggest social-media celebrities (“a Bolshevik” is how he described himself in the blurb of his account).”